Jose Santistevan was called home by his Lord and Savior to his eternal resting place on December 12, 2018 surrounded by his loving family. He was born in Fort Collins, CO to Ricardo and Silveria Santistevan.

He is preceded in death by his parents; Mary, his beautiful wife of 57 years; and his two sons, Lawrence and Richard.

He was a member of Local Union 412 for 66 years as a plumber/pipefitter. He loved traveling around the country, camping, and his favorite pastime was fishing.

We extend our sincerest gratitude to the Heritage Hospice staff.

Services will be held Monday at 10 am Holy Trinity Church 42 Road 3520 Flora Vista.

Instead of flowers, he would want you to donate to your favorite charity.

Edward Joseph Sosaya Sr. (“Eddie” to his friends, “GaGa” to his family), our wonderful and loving patriarch passed away at home surrounded by his family on Wednesday, December 5, 2018 at the age of 85. Eddie was born in Santa Fe, NM on August 8, 1933. He graduated from Santa Fe High School as a 3-sport letterman. Eddie was a Korean War Veteran serving as a Pipefitter for the United States Navy aboard the USS Shoveler. He went onto becoming a master plumber, business owner, San Juan Democratic County Chair, civil servant with the State of New Mexico Small Business Division and was elected into the NM Democrat Hall of Fame. In spite of his many professional accomplishments, Eddie was best known for being a proud and beloved husband, father, grandfather and great-grandfather. He is survived by his wife, Lucy Sosaya; his children, Patti Guthart (Tom), Eddie Sosaya Jr. (Cindy), Melanie Watkins (Todd); grandchildren, Amy Sosaya, Daniel Sosaya (Jamie), Chris Guthart, Cara Guthart, Ryan Watkins (Amber) and Olivia Holbrook (Brent); great-grandchildren, Isabel and Ian Gonzales, Garrett and Skyler Sosaya, Emmy and Kendall Watkins, Madelyn and Harper Holbrook; brothers, Jimmy and Raymond Sosaya. He was preceded in death by his parents, Frank Sr. and Ida Sosaya; brothers, Frank Jr., Manny and Bobby and sisters, Helen and Dolores. Eddie was a political historian who enjoyed spending time with his family by fishing, camping, golfing, watching Notre Dame football and attending UNM football games, but most of all Eddie enjoyed having family get togethers as we all feasted on Lucy’s delicious New Mexican food. A visitation will be held on Tuesday, December 11, 2018 from 6:00-7:30 p.m. at FRENCH – Westside. A Mass will be held on Wednesday, December 12, 2018 at 10:00 a.m. at St. Jude Thaddeus Catholic Church, 5712 Paradise Blvd. NW Albuquerque, NM. Interment will follow at Santa Fe National Cemetery beginning at 1:30 p.m. Pallbearers are Eddie Sosaya Jr., Tom Guthart, Todd Watkins, Daniel Sosaya, Ryan Watkins and Chris Guthart. Honorary Pallbearers are Brent Holbrook, Ian Gonzales, Mike Gonzales, Eric Childers, Rick Laemmle and David King. Memorial contributions may be made to the American Heart Association at 10900-B Stonelake Blvd Suite 320, Austin, TX 78759 or visiting www.heart.org. Please visit French Funeral’s guest book for Eddie at: www.frenchfunerals.com.

Published in Albuquerque Journal on Dec. 9, 2018

Bill E. Brasell died of natural causes on November 16, 2018 in Roswell, NM with his daughters, Tracy Byrd and Carla Lamb, both from Albuquerque, NM by his side. He was 93, born in 1925 in Crosbyton, TX; one of eight children to John and Lottie Brasell. He is survived by his Brother, Wayne Brasell and Sister, Nita both from Lubbock, TX, as well as his daughters and six grandchildren. His Brothers, Rex Brasell and Leland Brasell also deceased were U.A. Local Union No. 412 Members. His grandsons, Matt and Joshua were also U.A. Local Union No. 412 Members. His great-grandson, Prentice Jones is currently enrolled in the Apprenticeship Program at U.A. Local Union No. 412. Bill was a Communications Specialist on the USS MT Olympus during WWII in the Pacific Theater. 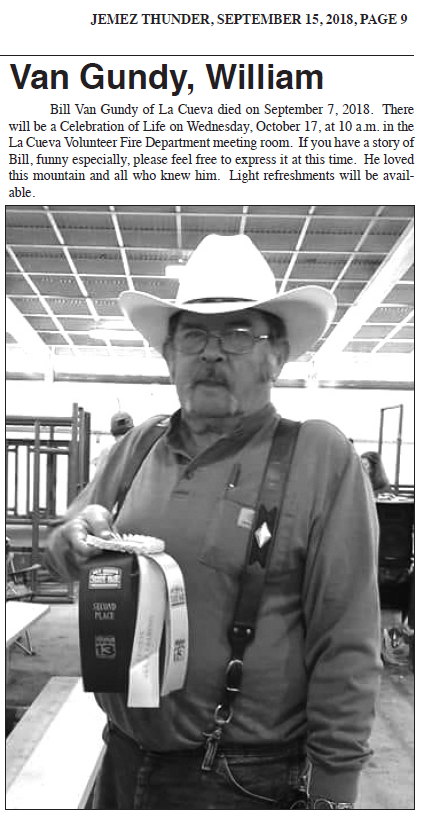 LeRoy A. Ortiz, age 83, a lifetime resident of Albuquerque, went to be with his Lord on Thursday, July 26, 2018. He is survived by his son, Freddie Ortiz and wife, Penni of Farmington, NM; daughters, Ann Arguello and husband, Leslie of Raton, NM, Joyce Boeck and husband, Dennis of Garland, TX, and Annette Ortiz of Albuquerque; brothers, Bob Ortiz and wife McGee of Farmington, NM, and Rudy Ortiz of Barstow, CA; sister, Gloria Ortiz of Pueblo West, CO; numerous grandchildren, nieces and nephews; and many friends. LeRoy was preceded in death by his beloved wife, Pat of 62 years; son, Mark Ortiz; and grandsons, Joshua Vargas and Aaron Ortiz; parents, Fred O. and Zalma Ortiz; sister, Joan Cornay; and brother, Vernon Wallace. LeRoy was a member and trustee of Local 412 Plumbers and Pipefitters Union for sixty years. He was an avid hunter and fisherman. LeRoy was a loving father, grandfather, brother, uncle and friend and will be deeply missed by all who knew him. A Rosary will be recited Tuesday, July 31, 2018, 8:30 a.m. followed by Mass of Christian Burial at 9:00 a.m. at The Shrine of St. Bernadette, 11401 Indian School Road NE. Interment will follow at Sunset Memorial Park Cemetery, 924 Menual Blvd. NE with a reception to follow at FRENCH – Lomas Reception Center. Please visit our online guest book for LeRoy at www.frenchfunerals.com.

GILBERTO GIL ULIBARRI Gilberto “Gil” Ulibarri, 80, passed peacefully at home with his family by his side on Sunday, May 27, 2018. He was born on College Street in Santa Fe to Carmelita Jacquez Ulibarri and Eulogio F. Ulibarri. He is predeceased by his parents, his brothers: Toby, Leo, Jake, Carlos; sister: Jean Lopez; his first wife, Angie Mares Ulibarri and infant twin granddaughters: Jacinta and Andrea. He is survived by his wife Charlene Maes and step-daughter Jessica Johnson; sons: Toke Ulibarri and wife Diane; Jeff Ulibarri and wife Angela; daughters: Lucretia Ulibarri-Romero and husband Robert; and Cindee Ulibarri. Beloved grandchildren: Lucia, Leandra, Linnea, Kassidi, Devyn, Tanner, Angeleah, Brody, Daisy and great-grandchildren: Emilio and Xariah. He is also survived by his sister: Emma Roybal, sister-in-law Connie Ulibarri and in-laws: Rachel and Carlos Maes, Lawrence, George and Anita Maes. He was loved by many nieces and nephews. “Uga” graduated from St. Michael’s High School in 1956. He volunteered for military service by joining the U.S. Army in 1961 and was assigned to Honor Guard Duty at Arlington, VA. He was honorably discharged in 1964. He successfully owned and operated City and Country Plumbing & Heating for over 25 years in Santa Fe. He worked at Los Alamos National Laboratory and was a proud member of UA Local 412 Plumbers and Pipefitters Union. He volunteered at Guadalupe Parish in the Soup Kitchen. Gil enjoyed spending time at his ranch in Gallina, New Mexico (God’s Country) where he took great pleasure in watching the eagles soar above him. He loved his family greatly and will be deeply missed but never forgotten. He left a lasting impression on anyone who had the good fortune of meeting him. Services are scheduled for Tues., June 5 at 7pm where a Rosary will be recited by Deacon Martin Gallegos at St. John the Baptist Catholic Church on Osage Avenue. The Funeral Mass will be held Wed., June 6 at 11am at St. Anne’s Catholic Church on Hickox Street with Fr. Larry Brito presiding. Burial will follow at the National Cemetery at 12:45pm. A reception will immediately follow in the St. Anne’s Parish Hall. Rivera Family Funeral Home 417 East Rodeo Road Santa Fe, New Mexico 87505 Phone: (505)989-7032 Fax: (505)820-0435

1930 – 2018
It is with great sadness that the family of John (Bud) Benton, loving husband, father, brother, uncle, grandfather and grandfather, passed away on April 9th, 2018 at the age of 87 after a courageous battle with cancer.
Those left to cherish his memory are his wife of 63 years, Margie Benton, his daughter Julie Beth Moore her husband Johnny Moore, daughter Brenda Nebhan, grandchildren, Kelley Meinhardt (Christian), John Malins, Shawn Ross, Cory Ross and great grandchildren, Makayla Malins, Benjamin Meinhardt, Xzavier Malins, Thea Meinhardt.
Bud was born October 12, 1930 in Bakersville, Texas to John Albert Benton and Katie Bingham. He graduated from Sunset High School. He married the love of his life, Margie Lea Barnes on February 25th 1955. After moving to Las Cruces, Bud began working as a pipe fitter welder and was a member of Local 412 and later began his own business, Bud’s Welding until he retired. Bud took great pride in his welding and fly fishing skills. He served honorable in the United States Air Force as an Apprentice Weapons Mechanic during the Korean War. Some of the greatest joys in his life were teaching his welding skills and spending time with his precious grandchildren and great children. He was always there to help those in need and will always be in our hearts.
Bud was preceded in death by his two older sisters, and son-in-law, Kenneth Nebhan. Death leaves a heartache no one can heal. Loves leaves memories no one can steal.
A Visitation is scheduled from 5 pm to 7 pm, Friday, April 13, 2018 at Getz Funeral Home Chapel, 1410 E. Bowman Avenue Las Cruces, NM. Funeral services will be held at 1 PM, Monday, April 16, 2018 at Getz Funeral Home Chapel with burial to follow at Hillcrest Memorial Gardens Cemetery, 5140 West Picacho Las Cruces, NM.
Serving as pallbearers will be, Greg Moran, Patrick Halvorson, Butch Parisi, Richard Meyers, Gerry Drake, and Gene Pettit. Honorary pallbearers will be, Arthur Johnson, Pete Bauer, Christian Meinhardt, Mike McElroy and Ken Nebhan.
Special thanks to his Ambercare Hospice nurse, Caroline whose love and compassion eased his journey. Caroline you will have jewels in your crown. His home health aide, Josie thank you for always treating him with the respect and care he deserve. All the nurses at the Memorial Cancer Center, our special thanks to Lourdes and Laura who made always put a smile on his face.
Arrangements are with Getz Funeral Home 1410 E. Bowman Ave., Las Cruces NM 88001. Please visit http://www.getzcares.com/
to sign the local online guest book. 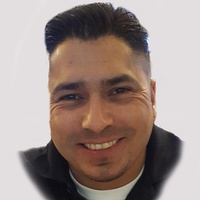 On Friday, April 6th Mark Parras, husband, father, grandpa(papa), brother and uncle, went home to be with the Lord. Mark will be remembered forever by his wife and best friend Julie, his girls, Julianna Duran(Gabriel Salcido), Reyna and Marisol, his grandchildren Bubba, Elario, Anneliese and Mateo, his mom Lydia Parras(Hector DeLuna) his sister Flory Rivera(Jimmy Rivera), his brothers Chris Parras Jr.(Dina) and Robert Parras(Virginia) and his mother in law Deborah Serna. Mark will forever be missed by his nieces and nephews. He was preceded in death by his father Cristobal Parras, Sr., his maternal grandparents Apa Julio and Ama Grande Reyna and paternal grandparents Regino and Sofia Parras.

After the services his family will be taking Mark home to his final resting place in Bishop, Texas. 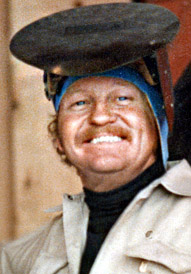 He was a welder and pipefitter, and owned and operated Doughty Construction. He was a member of the local 412 Union for 50 years.

Loyd enjoyed trap shooting, having coffee with his friends, computer games, following the stock market, and playing cards and board games with his family.

He was preceded in death by his parents.

Arrangements are under the direction of Terpening & Son Mortuary. Condolences may be expressed online at www.artesiafunerals.com.